The event is an update to the Hell Pit event, and seems to make a few changes to the format and slight tweaks to the rewards. The rewards are still great, so this is likely a good event to do.

Lore and Overview
Introduced in October, 2020, Harvester of Nightmares updates the Hell Pit event, applying the theme of Ravenloft/Barovia.

"The Harvester of Nightmares has invaded the dreams of the citizens of Protector's Enclave. Are you brave enough to enter the nightmare realm and stop it?"

To start, head to the PE event area and talk to the Vistani Recruiter. Rewards are given by the Dream Collector, an NPC in the same area.

Every day, if you beat the base challenge you will receive 2 Token of Participation.

Unlike Hell Pit, you use the queue system, and it can be found under the Event category. You can queue with a party, and it is a fast furious event.

During the first tier/week, the event has three parts. The first two consist of waves of foes from some theme (fey, undead, etc.). The final part is a single boss, which is a foe from other Neverwinter content. In week 1, the waves and boss are all very easy for a full party.

Repeating the Event: You may repeat the event, taking a special "Inception" quest that is exactly the same but grants a chest called Cache of Echoes containing RAD and gemstones. The Inception repeatable quest can grant up to 2 more Tokens of Participation per day.


At the second tier (which you could unlock after 7 days), you gain a chance to earn an extra Token of Participation via an optional bonus round. So, with the bonus you get 3 total.

To do the bonus, don't exit through the normal portal back to PE. There will be another rift near the portal. Enter the rift for the fourth bonus round. You will face 2 bosses at the same time, though it is not particularly har.


If you can complete 14 daily challenges, you get a Token of Achievement.


During the third tier of difficulty, you will face "the most difficult challenges" and earn up to 7 Token of Challenge. This is not much harder than usual, but the second wave is now what had been the final boss wave, and the third wave is now two bosses (similar to the bonus). There is no bonus in the third tier, and each wave is harder than they would have been before. With a 5-person random team, it should all still be fine.

On the final day, the first wave is 1 boss. The second wave is 2 bosses. The 3rd wave is the Harvester of Nightmares, and they fight and then summon 1 boss, when defeated they return and summon 2 bosses, and then they finally will summon 3 bosses and finally you can defeat them! That final battle is a worthy challenge.

The event has three primary types of rewards. 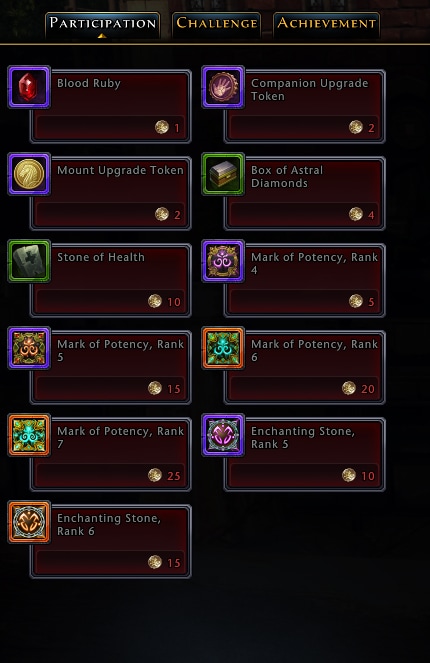 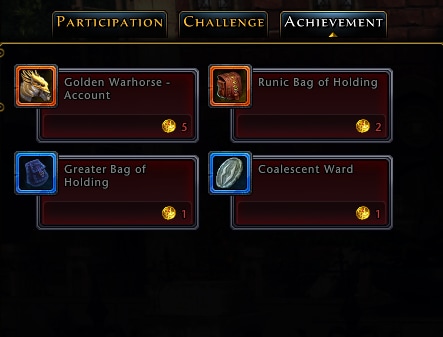 Tips and Exploits
So far, the first week is very easy, so no special tactics are needed.

Always form a group and then queue. You can find people in PE looking for a group. With a full party (or even 3-4 and the private queue) you can immediately queue into the event. If you just queue solo, the system tries to balance the party and you may have to wait a very long time to get in.

Because the repeating quest grants RAD and refinement, and is fast, it is excellent for relatively new level 80 players to get the AD and Refinement to upgrade equipment. It can also be worth doing until you get the 2 extra daily Token of Participation, since those can be cashed in for good rewards.

Tip: When you complete the daily quest, always take the Inception repeat quest. The next day, take the daily quest. When it completes you will receive rewards for both the daily and the repeat (even though you took the repeat the previous day).
Playing:
Dagdra Deepforge: Dwarven Cleric
Garla Shieldbreaker: Half-Orc Great Weapon Fighter
Zendra Soulseeker: Moon Elf Warlock
Jalazea Shieldborn: Tiefling Paladin
My Dungeons & Dragons blog can be found here!
Post Reply
1 post • Page 1 of 1
Jump to